Like I wrote earlier, I use some rather primitive dovetailing technique for the three small drawers in my medicine chest. They have a single tail on each corner, instead of the neat row of tails and pins you see in slightly newer stuff. This is all based on the time when the dovetail made its first presence in drawer construction, the 17th century.

Making them is also a little different, allthough I believe these techniques survived for a long time. Even the fanciest pieces from the 19th century show overcuts in the corners and marking lines still present. Only in the modern eye, used to machined perfectness, this looks a bit odd.

Making the drawers starts out innocent enough. After sawing the one big tail (overcutting the corners a liberal amoubt), I mark the pins with a pencil. I like the pencil better then a knife these days, because it is easier to see. This is a modernism of course, pencils were probably too expensive back then for a simple joiner. 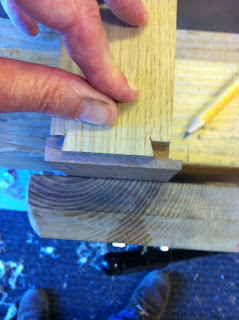 The sides of this socket are then sawn out. Here the overcutting continues. I cut a long way into the face. This is a half blind dovetail so it is always difficult to clear out the corners of this socket. Overcutting helps enormously. You can even do better on this, really dig the point of the saw into the corner. These overcuts will be inside the drawer and can hardly been seen. 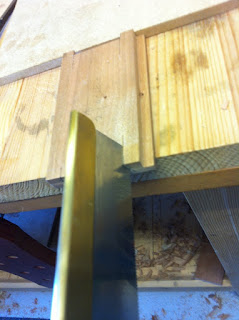 The rest of the waste is chiseled out in the usual fashion. To get at the last fibers in the corner of the sockets, I use a utility knife. I don't have skew chisels, and this works plenty well enough. 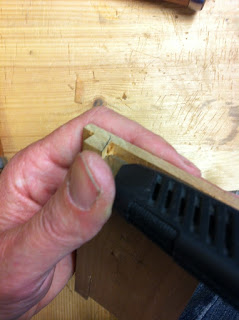 And the result. They fit nicely. Corners are clearly overcut in this picture. You can also still see the marking lines. All that doesn't matter in this kind of stuff. The bottom is nailed on, it was rather difficult to mail into these 1/4" thick sidewalls! I had to repair a few spots where a nail had gone astray. 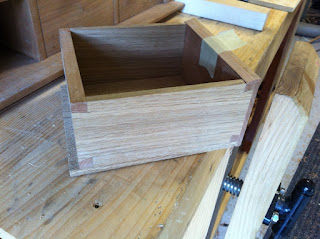 It looks like most of the contruction work is finished by now. Time to sharpen the gouges for some carving work! 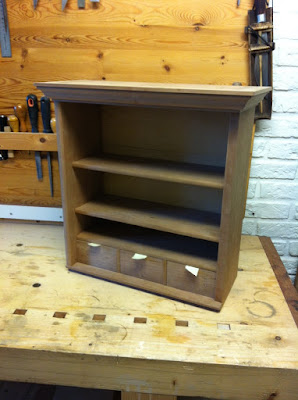